Voyaging Through The Puzzle of Civilization

Cruising is sort of like being in a life-size puzzle. You sail from piece to piece and the game is to figure out each one and how it fits in a larger context.

Histories of one place are related to another. One region’s dialect originates from a nearby or long-gone neighbor’s language. Monuments are erected and stand longer than memories of those to whom they were dedicated.

I enjoy voyaging for this very aspect: the learning, the exploring. Often, however, I am left with more pieces I can’t place than those which fit neatly.

Here is a sample of my collection of unplaced pieces. I know there are answers to each one. It’s just that, while cruising, you don’t have time (or inclination) to follow up on every last piece.

How did the Knidos sundial work? We came upon it among the ancient Greek ruins on the Turkish peninsula of Datca.

How were the rock-cut tombs of Lycia in Turkey created? With scaffolding? By guys hanging from ropes?

What is the story behind this lone bell, rescued apparently from the rubble in Monemvasia and unceremoniously hung in a tree in a corner of the town? The nearby plaque which details the history of that particular part of town makes no mention of the bell.

What story is being told by this relief we saw on a house inside Kastro, the fortified village on Sifnos?

Is the story of the lamp in Melissani Cave true? We visited this underground lake on the island of Cephalonia. It was exposed in 1953 when its "roof" collapsed during an earthquake. A boatman giving us a tour of it said an ancient lamp was found in the cave, but gave no further explanation. Is this a myth? If true, how did it get there?

Why are the Turkish markets sprawling with nuts, beans, and spices (just to name a sampling) while the Greek markets have none of these for sale in bulk?


What does this stone say? It was set into a wall in Rethymno. There are lots of these Ottoman (Turkish?) reliefs in Greek cities. 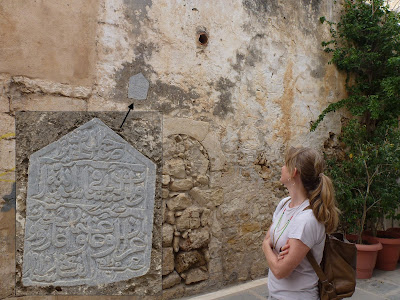 Here's another from Rethymno: 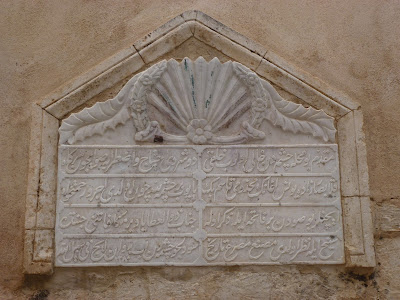 Why didn’t the Christians eliminate Muslim devotional manifestations when they took over the mosques? Instead, they installed Christian icons right next to the Muslim ones. Was it out of respect? If so, respect for what? The beauty or the meaning. If because of beauty, can it really be separated from meaning? And if they left it standing because of the meaning, then what does that say about any differences between the god of the Muslim and the god of the Christians?

How did the dovecotes come into being? And why just on a few Cycladian islands? I saw a book about them on one of the islands. Now I regret I didn’t buy it. A Greek told us they were barns with built-in pigeon roosts, and that later this became a style for homes.

Or maybe, another way of looking at it is that voyaging is a bit like standing in the middle of a huge museum. You see a grand collection of artifacts. Each one is fascinating in itself. But each also is an element within a context we are unable to perceive standing in halls that echo only our own wild guesses.
Posted by Mathias at 08:35

the real "puzzle" here is, why you're not slurping up mass quantities of pastas, cheeses, and olives by now

in the words of my good friend (and almost comically, proud Italian stereotype) Mike Luisi,... "The Italians taught the world how to eat"

you're within a few days range of half the backside of the boot, down to the heel.... dig in

couple of days shy of 3 full months without any updates ?

coming dangerously close to being just another one of the many derelict blogs, long forgotten by all including their authors....