I add (though with some reservation) this:
Trizonia

No, I didn’t make up that evocative name. It is beautiful, isn’t it? An intersection of three. And three itself has mystical provenance.

Trizonia is a small island in the Gulf of Patras. The only way to get here is by boat. Either your own or a tiny passenger ferry. There are no motorized vehicles on Trizonia. There is a village. There are a few tavernas. There are about 250 people reported to live here year-round.

And that’s about all the information I can find. There is no Wikipedia entry. Pages and pages of searches revealed virtually nothing more.

It’s a popular stopping point for sailboats cruising through the Gulf of Patras. That’s how we ended up there. The chart and guidebook showed a protected harbor. What we entered turned out to be something of a warp in the space-time continuum.

The low, lush island with natural beaches is such break in character from Greece’s mountainous and often barren landscape, that the island welcomes like an oasis. It is one of those places that immediately gives you the sense, “One could live here.”

No, perhaps more like: “One could escape to here.”

The day after docking, we walked the docks to view the boats. Instantly, we found ourselves in an eerie world; a ghostly harbor for the likes of the Flying Dutchman and Mary Celeste. Most of the ships seemed to have been abandoned. Or perhaps lived upon until those inside just ran out of food. Perhaps they sat inside at their salon tables, perfectly preserved, or as erect skeletons with boney fingers still wrapped around coffee mugs and whiskey jugs. 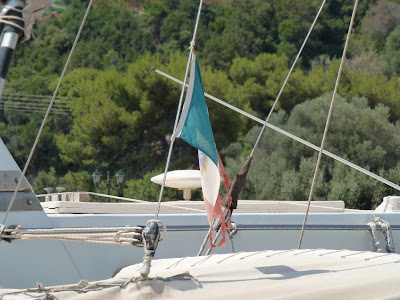 We shook ourselves free of the harbor and wandered over to the village. We walked one short street and suddenly we were in a charming square overlooking a different bay. One with a beach. Children splashed in the waters. Their parents looked on lazily from their towels. Or didn't and slept in the sun.

The small stone-tiled square next to the beach was surrounded by tavernas and a small store. A large tree provided shade. And in that shade, stood tables and chairs from the taverna. Greek men sat there, exchanging a few lazy words. Or not. Each man with one hand lying sphinx-like-guard to a coffee cup, the other dangling a cigarette.

This was a classically idyllic Greek village.

Rod Heikell, in his “Greek Waters Pilot” writes: “The small fishing hamlet has changed little over the years despite the number of yachts using the sheltered bay. ... Even if you do not eat ashore it is well worth your while to go ashore for an ouzo or brandy and coffee – sitting around the little square overlooking the small harbour you’ll easily lose an evening.”

An evening or a lifetime?

We cast off that evening at six because we had an overnight passage before us: 16 hours to the Ionian islands. As we let loose the lines and turned our rudder to Trizonia, I couldn’t stop trying to solve the mystery of that island.

Perhaps the sailors had become so enchanted with the island and continued to sit with the Greeks at the tavernas for so long that they came to look exactly like them. Perhaps those Greeks we saw were the sailors that had, some lifetimes ago, sailed into that magical port, tied up and just never left. They had successfully escaped.

As we headed west, I wondered if the key to understanding the island’s mystery was in discovering the three elements, forces or implications of its lyrical name.

P.S. In all of our fascination with the eerie boats, we never took photos of the charming village and island. I suppose you will have to visit it yourself to discover its beauty. You won't regret it. You can easily lose an evening. Or perhaps even your boat.
Posted by Mathias and Jen Dubilier at 08:42

very nice and mysterious article!I'm glad because Trizonia is my village,and I go there every summer!It's a paradise ,don't hesitate to come and visit it!You will love it!