Delphi - Center of the World

Zeus, needing to know the center of the world, released two golden eagles who flew in opposite directions. Where they met, Zeus threw down a stone to mark the spot.

That spot was the Earth’s navel, its womb. Both words are the root for the word Delphi.

Thus began, in Delphi, the worship of Earth. The veneration of Gaia or Ge.

Delphi became so sacred that people began bringing gifts and tributes to this place to honor the gods and curry favor with them. From artifacts discovered at Delphi, it is clear that as early as 800 to 600 BC, gifts were being brought to Delphi from places as far away as modern day Iran and Iraq.

No other archeological site in mainland Greece shows evidence of this kind of “worldwide” devotion.

From this site and the worship practiced there, developed a sucession of seers. An older woman of the most blameless life was chosen to the be the sibyl or priestess; the Oracle of Delphi. This succession of oracles lasted hundreds and hundreds of years.

During this time, the city of Delphi grew with a theatre, a school, and at the entry of the city: an agora or a marketplace where you could buy devotional candles and incense, and – I am sure – miniatures of the statutes and buildings. You know, the same junk you find today in markets.

Meanwhile, the tributes became more elaborate. Entire “treasuries” were built to house the money and items contributed by cities, rulers and rich citizens. At various times, the grandeur of the tribute and accompanying statue or building guaranteed a certain people “first rights” to predictions issued by the oracle.

This might seem like the oracle could be bought. Perhaps so, though it is said the oracular statements more often advocated temperance and peace rather than aggression.

Some sibyls were honest to their own detriment. When Emperor Nero visted in 67 AD, after having killed his mother eight years earlier, he was told:

“Your presence here outrages the god you seek. Go back matricide!”

For that bit of honesty, Nero had the sibyl burned alive. 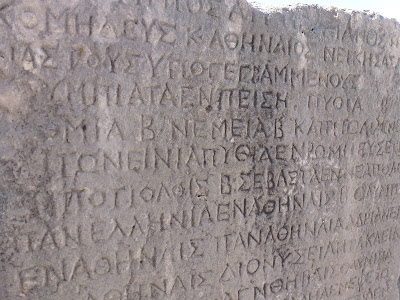 For us today, the question of a center is still relevant, though less geographically than in other ways. When we take private walks to consider our own core values, how do we arrive at them? What statements come from our core?

Once, I had a fantastical experience. Lying in bed one evening, I was supremely calm and meditative. As I sunk further into this state, I became suspended and weightless in infinite space. Perhaps as if in a womb. I found myself at the center of the universe. Here as this place, not only gravity was suspended, but so was time. And, if I so chose, all movement. I could bring existence to a standstill. Even reverse it, if I so desired. I enjoyed the utter serenity of this center. And then I allowed all to move again, to continue, to rotate.

Posted by Mathias and Jen Dubilier at 17:42