Of all the dreamy anticipations flooding my veins before ever casting off on this grand voyage perhaps none was as great as motoring through the Corinth Canal.

It is sort of like looking forward to a plate of just plain spaghetti with butter. Nothing special. Perhaps a little sprinkle of history as cheese. That is all I expected of it. Yet somehow I was looking forward to this particular passage like a kid to Christmas.

It did not disappoint.

In its scale, the canal is small. It is under four miles long. It connects two relatively unimportant waters by today’s standards. It runs from the Gulf of Corinth (at the eastern end of the Gulf of Patras) to the Saronic Gulf. Or, it connects the Adriatic to the Aegean. It slices through Greece parsing the Peloponnese’s identity technically into an island, though perhaps it already saw itself something  culturally and politically separate from mainland Greece.

Economically, the canal has always been a sinkhole. It saves a ship sailing from the Adriatic to, say, Athens about 175 NM. Not a whole lot. About half a day’s worth by modern freighting speeds of 15 knots. But because it is so narrow, most modern ships can’t use it. The canal never attained the traffic projected for it.

With none of the advantages of the Suez and Panama and lacking the intricate beauty of urban canals in such cities as Amsterdam and Venice, the Corinth Canal remains an odd, ugly duckling. One could say it is nothing more than a crude gash through barren landscape.

And yet, I loved passing through this canal. Though odd and lacking classical beauty, it is grand on charisma because of its proportions. This narrow aquatic corridor’s almost-vertical walls are 200 feet high.

Motoring through it, you can’t help but imagine how easy one could be crushed here. The soft limestone walls have always been vulnerable to seismic activity in the area. There have been plenty of landslides forcing closure of the canal. It would not be a comfortable passage for the claustrophobic.

For fellow sailors, here are some details: The canal authority monitors VHF 11. You hail before entering. If going from east to west (like we did) they will ask you to come alongside their dock at the entrance, register and pay the fee. Beware while at the cement dock. Rig your fenders over your gunwales and leave your lines slack because passing boats will create a large swell. The cleats on your boat, while rising and sinking (while also crushing into the dock) can be damaged if you are tied too tightly to the dock.

The fee was expensive. We paid 127 Euros for a 10-meter boat. But the registration was simple. Some boat details, my name and address. But no passports. No request for our transit log.

Then you stand by on VHF 11 and wait for them to tell you the order in which you will pass. We had to wait about an hour for a boat coming the opposite way to come through.

If you are traveling west to east, you hail on VHF 11, wait for permission to pass, and then dock at the office on the eastern end after passing through to pay the fee.

The canal is practically guarded on both ends by submersible bridges built in 1988.

I can’t adequately explain my love for this canal. I know that on some deeper level, it is connected to my childhood fascination with castles that had secret passages from one room to another. This is much like that, isn’t it? It is a short cut, and who doesn’t like narrow, hidden short cuts?

The other reason is because it is so historically rich. Passing through the Corinth Canal was just as rewarding as the many dusty sites of ruins we have visited.

“Here once stood the grand temple of so-and-so,” has read so many plaques we have come across.

This area is equally as rich with history. For over 2,000 years rulers dreamt about this canal. In 600 BC, Periander had plans drawn up, but then opted to build an overland road instead. The road was paved with stones and ships were dragged across the isthmus. Remnants of that road can still be seen today carved into the north wall of the canal.


Perhaps every Roman ruler contemplated the idea. We know Caesar had specific plans. By his time, Rome ruled all of the Aegean and he would have loved to spare himself the rough route around the Peloponnese. Nero had 6,000 slaves digging and they got about a tenth of the way through. When they heard of Nero’s death, they dropped their shovels and ran.

When the Venetians ruled the eastern Mediterranean, they thought about it. But it wasn’t until the late 1800s that actual construction began again. Those efforts bankrupted a French company and the bank which funded it.

The canal was completed in 1893 to immediate delight and financial disappointment. Our understanding is that the canal has gone back and forth between government hands and private companies.


As we passed through the canal, I felt the same sense of awe that I have felt at various historic sites. We weren’t at some simple geographic intersection of latitude and longitude. We were passing through a corridor of time and history. During parts of our short trip, we were benefitting from the slave labor of 6,000 Jewish prisoners of war. We stood on eastern end in perhaps the very place from which Mark Anthony and Cleopatra stood when they watched their ships hauled across the isthmus to fight Rome.

While other ruins are just that, this historic site still has life flowing through it. 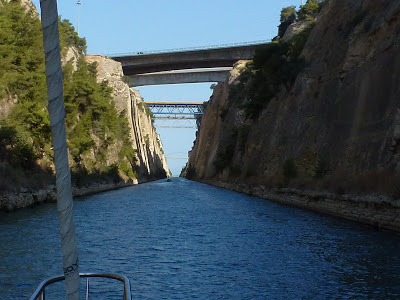