Santorini is one of the most photographed islands of the Cyclades. The fascination with Santorini is that its beauty is in stark contrast to the drama of being a volcano.

Thira, the island’s main town, was built clinging to the ancient rim of the volcano in a manner that makes one think the very town itself is deposit left from one of the past eruptions.

The cliff construction was not for the scenery and tourism which today dominates the village, but as a defensive setting against waves of various invaders over centuries. Minoans, Phoenicians, Dorians, Romans, Ottomans, Venetians, Germans, and others have all invaded the Cyclades. The island’s many names reflect its past. Some call it Santorini, which is the name established by the Venetians when they ruled much of the Aegean. But the street signs and the Greeks still call the island Thira. Perhaps some of the old folks still remember it being called Kalliste or “beautiful one.”

Some say that Santorini is the lost Atlantis of legend. That the remnant rim village is all that is left of the grand city that plunged into the sea in a single day of doom. If we go back to the original mention of Atlantis by Plato, it is clearly stated that his fictional Atlantis was a vast continent just beyond Gibraltar, in the Atlantic Ocean.

But something of the old Santorini has been lost. It is falling to a new invader. Armies arrive daily by the thousands on cruise ships and in planes wielding not swords, but credit cards and cameras.

As one local islander told us while we sat and drank Raki with him, “they leave with Santorini in their cameras, but not in their hearts.”

There are photographs from the early 20th Century showing what the town looked like before it was white-washed, gussied-up and offered up to tourists. For those who care, vestiges of that life can still be found.

To do that, venture off into the countryside. You will see it is blanketed in vineyards. Interspersed are fields of small tomatoes, fava beans and capers. It such a surprising sight on a volcanic island. These foods, mixed with the sheep, local cheese, olive tree groves, and fish from the Aegean provided Santorini with self-sufficiency.

We visited one of the island’s oldest vineyards. They had made wine long before electricity and machinery came to the island. Grapes were crushed in large stone basins. The juice flowed through basket strainers into aging wells.

In the 1950s, under the US Marshall Plan to restore Europe, the owner of this vineyard went to Athens to participate in a conference of setting up all kinds of cooperatives throughout Greece. As a result, in 1952, a US landing vessel arrived in Santorini and delivered the island’s first electric generator and wine-making equipment.

Imagine that. The Greek islands lived through World War II without electricity. That is why all the edges of roads are painted white. All trees lining the roads. And all edges of steps in Greek villages are painted white. At first, Jennifer and I thought it was an aesthetic affectation until we had to walk home one night in the pitch black and down a long series of stairs to the harbor in which Phoenix was anchored. If it had not been for the white, we would not have been able to navigate in the dark.

The wine made here is called Visanto. It is a sweet red wine that is, essentially, a variety of what most of the world knows as port. The tomatoes here are the small cherry-type with deep top-to-bottom pumpkin-type ridges. They are dark and salty in flavor. Not surprisingly, they are made into paste. Tomato paste became another cooperative industry. They are still factories producing paste seasonally today. 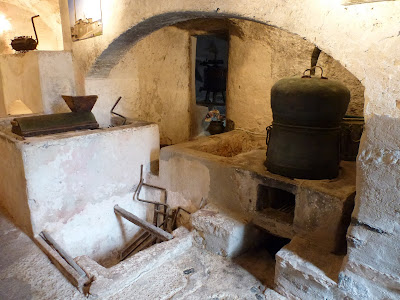 An old tomato paste processing room. Notice the masher in the upper left.

I will remember Santorini for its exqusite food. No where else have I ever eaten such rich tomatoes. The fresh anchovies right from the sea; not salty and canned as we know them, but fresh and complex, were extraordinary. The Visanto. The capers. The fava.

Posted by Mathias and Jen Dubilier at 09:02

Its great to read your article on Santorini, it takes us back to the Cyclades. We're sitting moored to an abandoned boat yard on the edge of post-industrial Athens, full of urban neglect and decay. Such a different world. We are, however, appreciating being out of the winds in the Cyclades.