Folengandros and Sifnos - Terraces and Kastros

Folegandros, a small, less-visited island in the Cyclades
is a dry, rocky island. Over what must have taken centuries, its determined citizens picked up stones on the steep slopes, one by one, and started building walls. This created small terraces. Many only as wide as maybe six feet and twice or thrice as long.

The resulting terrace is known in Greek as a lithozona. A small area to eke out some sustenance. The remaining soil was less soil and still more rock. Yet somehow these lithozonas were cultivated with olive trees, hay, tomatoes, grapes, and capers. Sheep were grazed. Barns and homes were built on these plateaus.

I’m sure that the first walls were haphazard. Even today, we saw a few slap-dash ones. Such as this one.

But over time, the skill of those former farmers and tradesmen was evident in today’s standing testaments. There were watchtowers built on cliffs with no binding material. These towers had bonfires at the ready to communicate danger to other parts of the island and neighboring islands. All the lithozonas walls are of this “dry stone wall” type of construction.

Almost the entire island has been terraced. It must have taken generations upon generations. We can scarcely imagine such patience and commitment, much less dedicate ourselves similarly. (Or are we, just as fervently, creating some kind of electronica future byte by byte, device by device?)

Folegandros’ oldest village is a fortified town on a cliff. Impossible to reach from the sea and difficult to breach by land. Almost all Cycladic islands have one of these villages similarly situated. This one is called Kastro. A variation of castle.

Inside, to our surprise, life still flourishes, bright and lively. 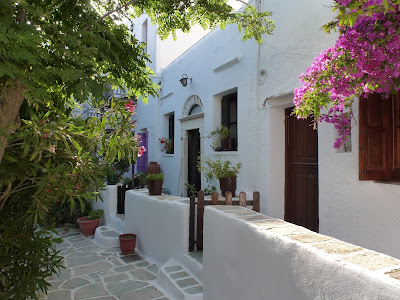 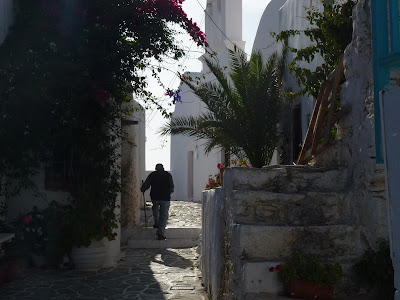 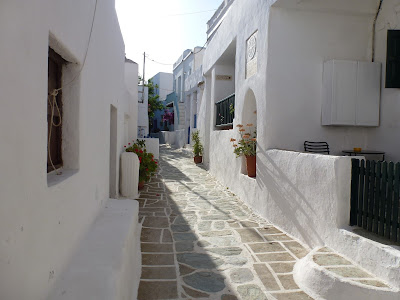 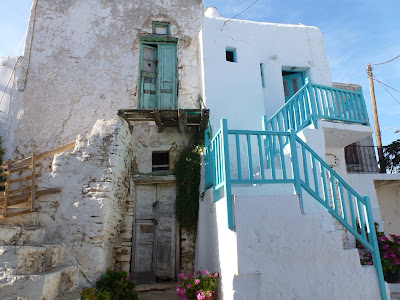 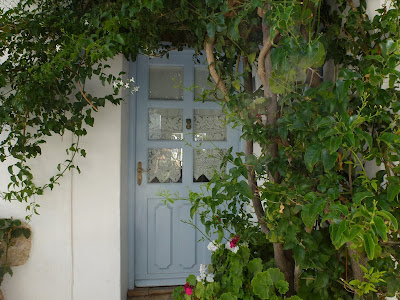 Who are the 765 people who choose to live here on this island; many of them in the small, cramped conditions of this fortification? Homes which are photogenic on the outside, are dark, dank and a bit musty on the inside.

One of them is a Romanian. He runs one of the restaurant in the village square. We talked to him for a little while in between serving guests. He came here when he was 12. Now in his mid-twenties, he has no immediate plans of leaving.

In winter, he says, they play soccer a lot. And he helps on a fishing boat. In summer, he works at (owns?) the restaurant.

This island is a typical example of what we have found in many Greek towns: A little bit of tourism is good. Too much destroys. A trickle of tourists allow indigenous people to supplement their living. The marauding masses forces the indigenous to live for the tourists.

It was nice to visit a Greek island still living for itself. Even attracting a new generation to its lifestyle.

The next island we visited was Sifnos. It is similar to Folengandros in that it is off the heavily trodden tourist path. It has around 2,600 residents in a number of villages around the island. Most encouraging is that the population is almost exactly the same as it was just after WWII.

Sifnos has a more illustrious history. It is said that almost half of all bronze found in weapons and art throughout Mediterranean archeological sites came from Sifnos. Mines here also produced substantial amounts of gold and silver.

Until one day, they didn’t. Was it because, as legend has it, the Sifnians became greedy and instead of presenting a solid gold egg to the oracle at Delphi, they presented a gilted one? The resulting curse made the gold disappear out of the mines.

Or was it because the mines simply was exhausted? Some suggest the mines flooded because they were eventually dug below the water table.

Posted by Mathias and Jen Dubilier at 09:50