We have to clean up our act.

During an early morning walk along the beach here in Rethymno, I took some photos.

I’ve been to some beautiful, remote shores. The Bahamas, Turks and Caicos, Bermuda, Azores, Puerto Rico, Vieques, to name a few. Every one of them suffered from the same pollution.

Many in America think we don’t have this problem but that’s because our beaches are constantly cleaned. The east coast of America is also spared a fair amount of garbage because the Gulf Stream washes it out into the Atlantic.

You may have heard of the floating garbage patch in the Pacific. Here’s an article about it in The New York Times. It’s not just happening in the Pacific. Google “Atlantic garbage patch” and you will find similar stories. Garbage is floating all over the oceans and it congregates in the eddies and gyres.

The problem is not simply a visual one. After all, out of sight, out of mind. Who cares if some garbage is floating in the middle of the ocean? We’ll clean it up if it lands on the beach.

The problem is that the plastic decays out there. It breaks up into small enough pieces that it is eaten by fish. Recent news articles report that a third of the fish caught in the English channel have plastic in their bellies. Similar reports are coming in from the Pacific. If it is so in those places, we know it is the same everywhere.

In a report on the Smithsonian website, there is a report of the plastic accumulation in Antartica.

Here’s a quote from that report:

“On a smaller level, UV light and the salt in seawater cause microscopic particles of plastic to emit toxic chemicals such as PCBs and DDT. (...) The chemicals tend to bioaccumulate in organisms as they move up the food chain, and can eventually lead to tainted populations of fish that humans regularly consume.”

So we are eating the very plastic bag we brought home from the grocery store. Or the candy wrapper. Or, morbidly, the rest of that Barbie doll I found on a beach in the Bahamas. Not only that, we are eating the released chemicals of those plastics.

We cannot stop buying plastic toothbrushes, but we can stop accepting plastic bags. Even in the produce section of the supermarket, we can avoid the plastic bag and ask management to please make paper bags available.

We can recycle more. We can compost and thereby only need paper bags for our kitchen garbage. Even if the kitchen garbage bag doesn’t end up in the ocean, it kills me to think that we are putting food scraps into a plastic bags and burying it all in a landfill. We can drink from water flasks instead of buying bottled water. We can vote and support legislative change on municiple and national levels.

No one is exempt from contributing plastic into the oceans. Not even I. One of my plastic bags blew out of my hands the other day and landed in the harbor beyond my reach. Our boat mat blew away in high winds. And those who live further inland and have their garbage picked up in trucks from which bits and pieces fall off and are washed into storm water drains and swept into local watersheds. If everyone, along shores as well as those inland, favor recyclable materials over plastic then the industries will respond and make those kinds of things.

Of course the best solution is get along with less things. But that’s a whole different story. 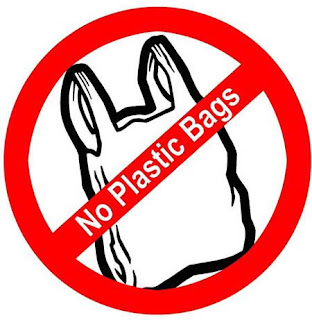