Upon our return from our "vacation from our vacation" two events greeted us.

First, it was two of the nicest days all winter here in Crete. Calm, sunny and warm. Just absolutely perfect.

The second event was that a Cretan resident hauled his sailboat out. We were docked against the concrete wall where he was going to haul out, so he asked us to move Phoenix back by 30 feet or so.

As we stood around and watched the operation, our friends suggested we ask him if we could have his spot on the dock where all the other wintering cruisers were docked.

Being a Greek, the answer was, of course, yes. 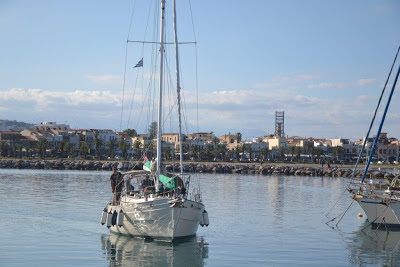 Berthold and Heidrun, our German friends, helped us with the move. You can see Berthold aboard. Heidrun helped by taking the photos. 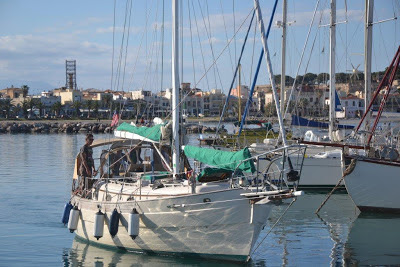 In the photo above, you can see all of our fenders were deployed on the starboard side while we were docked at the concrete wharf. While we were gone, the wind blew Phoenix against the dock so hard, the fenders were absolutely flattened, according to our friends. So they added their two blue fenders. 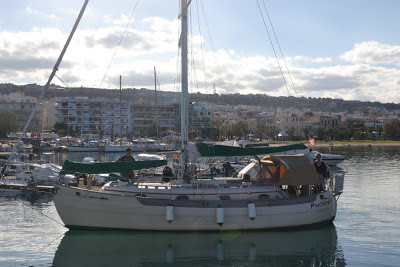 Actually, during this move, we already flipped a few of the fenders to the port side. 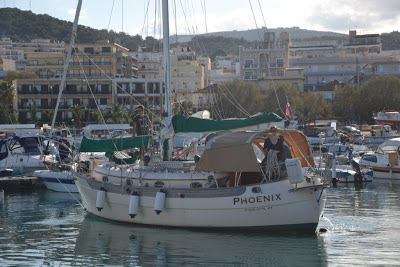 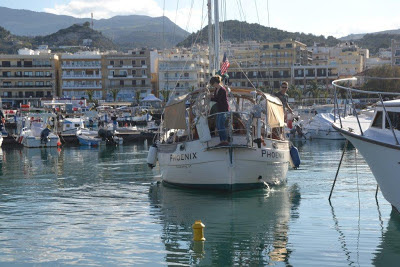 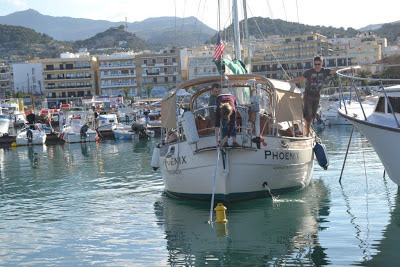 Jennifer is hooking a float to which one of the forward mooring lines are attached. 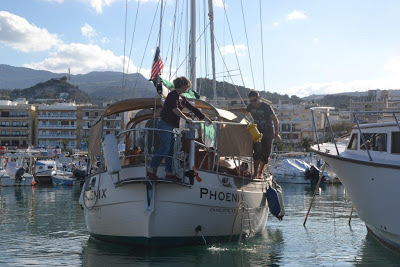 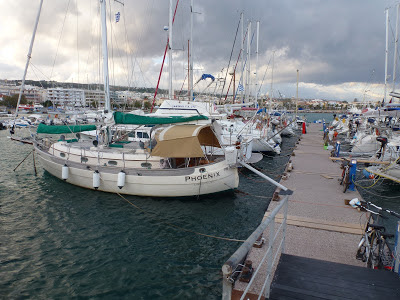 Now with mooring lines forward and docklines (with springs) aft, we are much more comfortable when it blows.

This dock is on the eastern side of the harbor. We were on the western side at the concete dock. The running joke that had developed was that we were "in America" all the way over there. The cruisers on this dock are from Germany, France, Switzerland, and England. So, now we've finally crossed the pond and are in Europe.
Posted by Mathias at 17:07

Good to see you guy's are back. It's howling 40+ knots at the moment in Orhaniye, we still haven't left. We tried on Saturday, but got hammered in 40 knts in the Rhodes Channel, so beat a swift retreat.