The Magic of Myli Gorge, Crete

Like Hansel and Gretel, we got lost in a magical forest this past week.

Our boat neighbors, Berthold and Heidrun from Germany walked with us through the Myli Gorge near Rethmyno. It was an all-day affair. Once beyond the busy streets of the new town, we walked up a slooping road along the seven-mile gorge. From up here, we saw the typical Cretan landscape of orchard upon orchard of olive trees.

Then we descended in the gorge which you can see in the foreground of the above photograph.

The long gorge used to be densely populated around 100 years ago. It had year-round water, which drove a slew of mills in the valley. The valley was so productive in milling that the Venetians stationed a tax collector right here in the gorge. No one lives in the gorge now. But there are still active olive and orange orchards. At the base of the trail, there is this one artist who appears to live here on a seasonal basis.

Just up the trail from the artist's house is one of the many caves that may have been dwellings up until a few decades ago, and now serve for storage and in this case, a barn.

The trail meanders along the creek which once was harnessed by the mills.

The gorge runs north-south, so unfortunately some of these shots were directly into the sun. I like this one because of the pine trees and the old foundation on the right. It reminds of the scenes in Japanese paintings.

There are at least three remaining churches in the gorge. They are still actively maintained and visited. One had a small graveyard with just a dozen graves, some as recently marked as 2010.

With every turn, there was something new in this magical valley. Another old foundation, a small orchard, a church, a mill, a brook, a canopied path. We didn't just wander through a different world, but many different worlds. 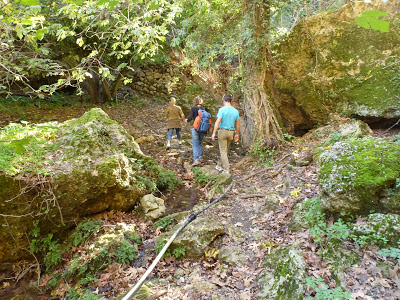 The path swayed back and forth between one ridge and the other. In the next shot, we had climbed up the west side and looked down on the church in the photograph above. 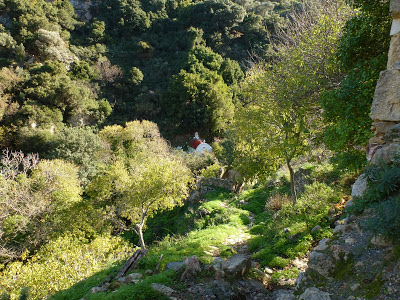 A few of the old mills were preserved just enough to provide an idea of how it all worked. 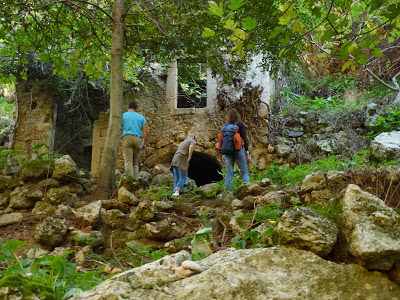 In the shot below you can see the aquaduct that connected all the mills in the valley with water. This one ends in a deep drain, dropping to the next funnel of the aquaduct. 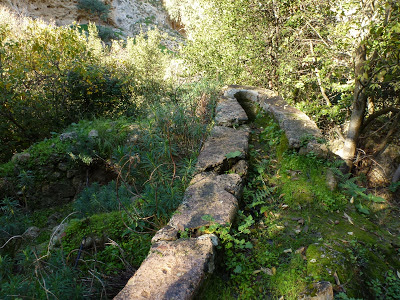 And this one place seemed to be restored. It was one of the many special worlds.

This church was particularly unusual in that it just worked with the rock formations given, without trying to insist on the outer form of a church. 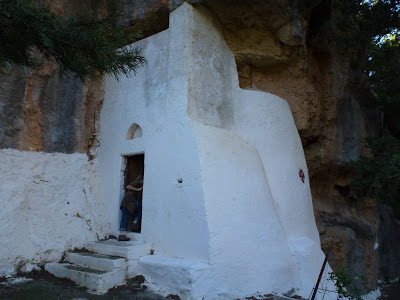 It took us several hours to hike all the way up the gorge. Every now and then we would be rewarded with great views of the progress we had made from sealevel to where we were.


After reaching the road at the end of the gorge, we walked to a village and ate at a taverna. As is custom, we were offered free Raki for desert. And on the walk down, we came across families harvesting their olives.


Further down the road, we came a loud and raucous cookout and party. The men outside at the grill told us they were celebrating the first communion of the house's ten-year-old boy. And immediately, we were dragged into, plied with cooked meat and more raki. It was a wild whirlwind through yet another world. We stayed for about 20 minutes and then wandered down through the dusk to the sea shore. 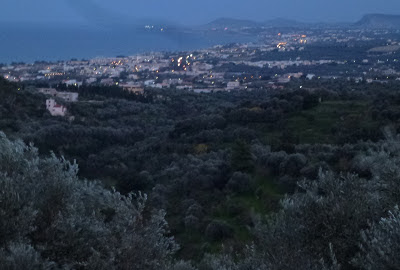 The scene before us reminded me of Edna St. Vincent Millay's poem "Afternoon On A Hill"