How To Replace A Cutlass Bearing On A HC33

We are about halfway through our fit-out projects. Time for a little update.

The helmstation of Phoenix came with four instrument guages. They were all made by Datamarine; a company that doesn’t exist anymore. We thought about replacing them in case they fail while we are underway, but we are spending so much money already, we decided to keep them. Also, each of the guages has a custom bronze frame. Check this out:

I have never seen anything quite like it. The frames alone went a long way toward sparing the instruments a death verdict.

One of the dials displayed “Miles Off Course” and relied on old Loran technology. Loran was the radiofrequency method of calculating positions before GPS came along. So we are pulling that unit out. That leaves us room to mount a Garmin 4208 chartplotter. Cutting the hole and finding a way to secure the chartplotter in the hole became a complicated project. It was tricky on Dolphins, but on Phoenix, it was like trying to find a clean way to shove a rabbit into a toothpaste tube. (Am I mixing metaphors here?) We are mostly done. Here’s the hole:

The yard is doing a ton of work on the engine; replacing hoses, inspecting the heat exchanger, pulling off the waterpump for cleaning, replacing the sensors for temperature oil, and well, enginely stuff.

The importance of an engine hour meter is important to calculate fuel usage – a process that is remembered in painful detail by my friend Joel because he was with me in the late 1980s in my diesel VW Rabbit around midnight as we drove up and down the hills of Vermont on I-89. He inquired as to the purpose of the plastic set-dial glued (pre-Velcro days) to my dashboard. I explained that since my tank gauge didn’t work anymore, I calculated my fuel needs based on miles driven since last fill recorded by the dial. Then I started swearing profusely, realizing we had already exceeded the mileage at which I was supposed to be empty. For the next hour-plus, we drove suspended more by our anxiety than by the shock absorbers. Luckily, the entire 12 mile stretch from the I-89 exit into Randolph, Vermont is all down hill. I filled the tank with 14.5 gallons. According to my owner’s manual, that was a half-gallon more than the size of the tank.

Anyway, Phoenix needs a place for the three round gauges to go and Jeff has furnished a nice mounting board that so far has five coats of varnish and is that many shy of the perfect mirror finish.

Here is the cut-out in the bulkhead and the mounting board. The large hole is going to accommodate the autopilot control.

This is a big project on a Hans Christian 33. The rudder has to be removed. And then the shaft can be pulled out. Then the bearing can be replaced.

But let’s back up: Very first, the steering quadrant has be removed from the rudderpost as in this shot:

You can see the red quadrant lying off to the side. The rudderpost is now free to slip out. Then the gudgeons have to be removed. They hold the rudder to the hull. Here you see them with the bolts removed.

And here the gudgeons themselves have been removed. The rudder is resting on a block. 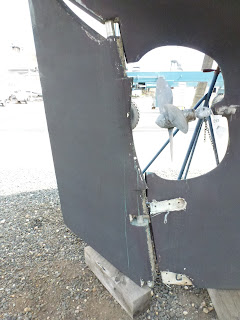 Next, the boat has to be lifted from the rudder, (which weighs, in technical terms, a fuck-load.) Here is the “travel-lift” with its straps in place to lift Phoenix. 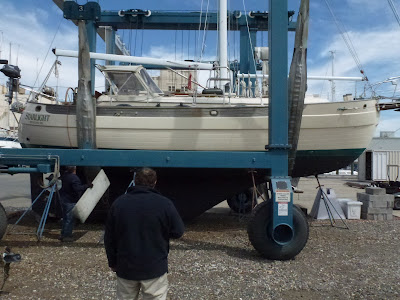 And note here that two guys are ready to hold the rudder. Just laying the rudder down takes two men. (I think that gives you an idea of the technical weight description mentioned above.) 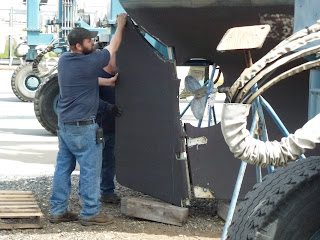 While our big fat girl was in the slings, we checked the scale. Don’t tell her but she came in at 23,000 pounds.

Officially, the displacement of HC33’s is listed as 18,000 pounds. Most owners who have been able to weigh their boats, tip the scales at about what Phoenix did. Perhaps the official weight was based on hull alone, sans: spars, standing rigging, running rigging, sails, 200 feet of anchor chain, 80 gals of diesel, water (our tanks were empty but she holds 75-80 gallons), X-gallons of bottom paint, etc. It all adds up.

Anyway, then the propeller comes off. And then the shaft has to be pulled out. This is usually so firmly seated in a rusted transmission housing, that it takes a “slide hammer” to extract it. The slide hammer is a long shaft with a weight that slides along it. The weight is slammed toward the rear, over and over, until the shaft ... voila ... emerges.

Once the shaft is finally out, the bearing can be replaced.

But since you already have the rudder off, you decide to have the cracks along the edges glassed over so no water gets in the rudder. After all, now’s the time to do it. Ouch, another thousand dollars. Ouch, another discussion of whether we are absolutely insane.

And a whole list of other projects which give us endless opportunities to wonder if we are insane; wonder if this is all worth it; fret about how long it is all taking; argue about priorities; rob us of our precious time in our limited cruising window.

Back to work.
Posted by Mathias and Jen Dubilier at 16:22 2 comments: Links to this post