Infatuation With A Boat - Nay, A Ship

Falling in love with a boat is like any romance. Full of fire and lurking with sudden disillusionment.
My daughter once asked me, “Why do they call ships ‘she’?”
Why indeed?
I have always known the answer deep in my being, but I had never had to articulate it.
I remember, vaguely in the details but emotionally accurately, learning as a young man that one referred to machines and ships with the female pronoun.
Even then, I felt I knew “why” in some vague way that nine-year-olds think that all knowledge of the world is by vague feeling. It just made sense.
It might have been while I was watching my father repair some appliance, maybe a toaster, in his basement workshop.
“Machines have a soul,” he said. “You have to understand them. They work in a particular way and if you understand them, then you can fix them, you can use them in a way that will make them last longer. If you treat them right, they will gladly work well for you.”
And that’s exactly how he treated his Snapper lawnmower which he ran only at slightly less than full speed.
“Don’t make the motor work at full speed,” he said. “Baby it.”
That lawnmower lasted over 20 years.
Now I had my twelve-year-old asking me why ships were called “she.” Why, essentially, we consider they have a soul and why that soul is female.
Imagine, I exhorted her, you were a sailor several hundred years ago. This would have been before sailors had GPS’s, when they sailed to territories of which they had no charts. Back then, they didn’t even have compasses. They sailed by instinct and superstition. And both were born of each other and worked equally as well in guiding them through fog, dark of night and storms.
All these men could rely on were each other and their ship. Their ship kept them afloat. It was hearth, home and their only safety in a world of dangers and worse unknowns. In such a world, they knew they had to do everything to ensure their ship was in good condition. While in harbor and underway, they maintained it and repaired it. Each individual was willing to give their life to save the ship, because only by each single sailor being willing to do that, can the entire crew depend on its survival.
Now imagine, I continued, you are such a burly, sun-burnt, poor slog of sailor. And you are doing all this for this ship in return for safety and protection? What only other relationship is like that? Who provides you with home and safety? Your mother. Maybe a wife. Furthermore, if you are going to anthropomorphize the ship, would you want to imagine you are on your hands and knees scrubbing the back of a man or a woman?
Calling a ship a woman is a form of worship. And as such, it justifies the work, the sweat, the potential sacrifice of life.
Finally, being a parent of my generation and conscious of gender stigmatization, I added:
“Now, you can call your ship, your future car or any ‘thing’ of yours whatever you want. He or she or it. I told you the history of why, not the rule of how it has to be.”
That’s all fine and good for a twelve-year-old. I am a 51-year-old pirate. Ships are female. And that’s that.
So when I say that, recently, I’ve been falling in love with a certain ship I’ve seen online, it is with the full assumption you understand exactly what I mean.
It is the same feeling you get when you can’t think straight anymore. You have to admit to something more than just attraction. Your head is constantly hot. You can’t focus. And you secretly worry that it isn’t what you hope. It’s better to be honest and call it infatuation.
Now granted. I must be careful. I am easily bamboozled. Let’s remember the “Mythical.” And I won’t even tell you about my secret flirtations with a Hans Christian 33 in Brittany, France by the name of “Le Clemence.” C’mon, how can you not look twice at a sweetie with a name like that. Especially after all we have been through.
So, when I speak of this new love, I admit to some fickleness in the love department. Here today and who tomorrow?
I can’t remember how it came to be that we even contemplated ever larger and more expensive boats. Was it because we first clicked on the listing of this boat, or was it because we first decided to not set any limits on ourselves.
Whichever. Now loading on the screen in front of me was a Hans Christian Pilothouse 44.
This... this is a ship.
A pilothouse sailboat has a superstructure on the deck which encloses an interior helm station, often a salon table, and on this one, a full-sized galley. Surrounding all this are windows, making the interior bright even on a dim day and keeping the helmsman warm and dry even on a cold and wet day.
On the deck behind the pilothouse is an outside helm station, so you can enjoy sailing in fine weather as well.
This; this is a ship.
Down below are two full-sized berths, another salon, two heads, shower, and an actual engine “room.” 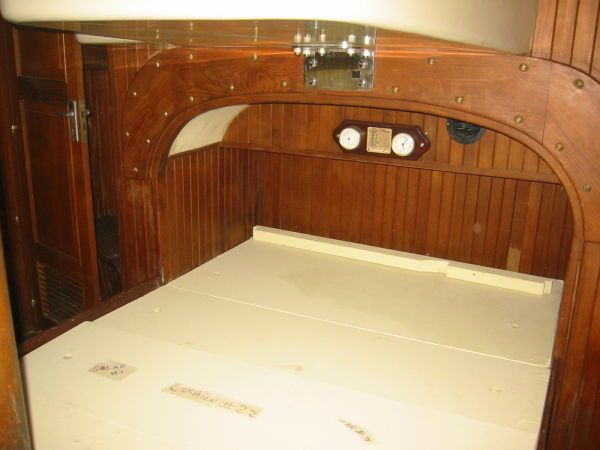 and – yes – a room with a counter-height workbench. 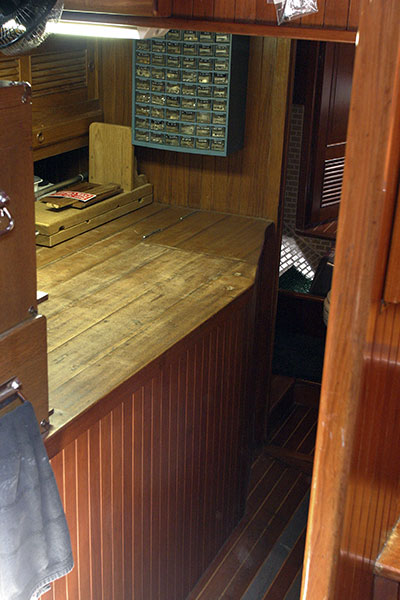 Was it the workbench? Was it the internal helm station? Was it just her lines? Or was it that this beauty was, mais quelle surprise, a Hans Christian?
This. This is a ship.
And who knows; maybe it isn’t even a detriment that she has stood mostly on the hard for the last fifteen of her thirty years. Maybe that means that Jennifer and I can make her our own; can resurrect her from the coma she has suffered for so long. And once kissed and sanded and painted and appointed and loved, she will awake to love us back. Serve us. Provide us with home and safety.
We, her crew. She, our ship.
Posted by Mathias and Jen Dubilier at 09:47

Email ThisBlogThis!Share to TwitterShare to FacebookShare to Pinterest
Labels: Journal, Of Boats

Very nice! I imagine her soul smiling at the prospect of getting back to sea!
Steve (in Eugene)

careful now, don't be gushing over her too much ... broker or current owner might happen across your blog and all your lowball offers will be rejected out of hand

Very very nice, I can see her smiling, and she intuitively knows what you two can do to make her come back to life on the water.....(with style!:) (judith in Yachats)

Re: the 'blog' on the blu hulled Hans Christian. I am the owner of this boat, and before you state "in horrible condition" you might contact me personally. The previous broker did a fraudulent and horrible job representing the true specs. and condition of this boat. This boat has always been in a state of refit yet the previous broker failed miserably to update the listing.

Are you the owner of this HC44 pilot house. If so please let me know how I may contact you.