The Road to Marmaris 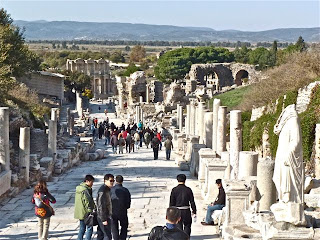 We left behind the town of Selcuk and the nearby ruins of Ephesus.
At one time during the Roman Empire, Ephesus was one of the grandest cities on the Mediterranean with a population of about 300,000. 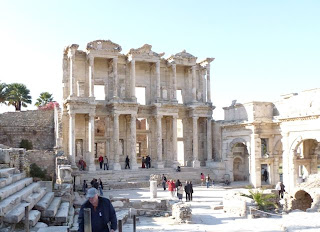 Perhaps because the harbor dried to a swamp and then to grassland, the city was never rebuilt a hundred times over, like, say, Rome. Therefore, one can wander among 2000-year-old ruins and from the remaining marble columns and walkways, imagine the masses of traders, gladiators and soldiers who wore groves into the very stones we trod.
We headed south in our rented car. Our destination was the southwest corner of Turkey where the waters of the Aegean meet the Mediterranean.
In that area are two towns of interest to us because they have some of the largest yacht marinas in all of the Med.
One town is called Bodrum. The other, Marmaris. Our goal.
All along our drive, we could see the past and future of Turkey. The past represented by towns whose roadsides fronts consist of large half-open restaurants or cafeterias, each offering exactly the same selection of minced meat dishes, kebabs, and Mezas or plates of various yogurt-based sauces and mixes. The tables are rudimentary, the chairs most often plastic. The patrons are usually men, playing dominos, smoking cigarettes and drinking tea, which is served in small hour-glass-shaped glasses.
The future was being built, apartment complex after apartment complex. Quick, characterless buildings made of brick and mudded over with stucco. In most towns, these were three- or four-story buildings and in some, they were high-rise apartments of 20 to 30 floors, right in the middle of fields on the edge of sprawling towns. On rare occasions, we saw developments of private homes too.
The path to the future was quite literally being laid beneath us as we rode on the pavement of a newly widened road which now accommodated two lanes in each direction, separated by a median. I wondered why Turkey was choosing this method of improving its major arteries instead of highways, European or American style. But the answer is immediate and obvious: It is cheaper to expand roads than to build new ones. It is quicker. And: To bypass these towns would be an immediate death sentence to rural Turkey. Perhaps it is the very brilliance of Turkey’s exploding economic success that prosperity lies in growing the towns, not bypassing them.
On the negative side, these wide, divided highways bifurcate towns, making it difficult to get to stores if you are driving on the other side. For pedestrians, it is a treacherous risk to walk across this raceway.
At the southern end of this trip, there was a man we wanted to meet. His name is Kemer. We had been put in contact with him through friends of my sister. My sister’s friends, a couple in Istanbul, invited us to dinner and when they heard of our disaster and that we were on the search for a new boat, we were put in touch with a cousin. This man. This Kemer. He is a sailor who has circumnavigated and has been living on his boat for six years. Right now, he’s living aboard, anchored in a cove near Marmaris.
“Come down. I will be happy to meet you and talk about boats,” he said on the phone.
I scribbled down keywords of his directions. The names of small Turkish towns he spelled out in maritime alphabet style: Kilo, Alpha, Romeo and so forth.
Because we were arriving at the coast late in the day, we spent an evening at a nearby hotel, and started the final leg in the morning.
Upon approaching the coast, we began a serpentine descent down steep switchbacks revealing stunning views of a valley penetrated by a Mediterranean bay. Coming off the highlands and descending to the coast, I instinctively breathed more deeply. This is where I like to be. The edge between land and sea. 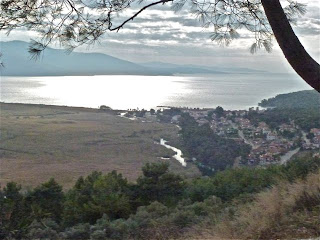 I have spent all the summers of my life where water laps at land. The shores of Fire Island. A lakeside camp in Quebec. The shallow headlands of Cape Cod. The coves and beaches of Lake Champlain.
This is where my heartbeat can slow. And this is where my heart beats a bit faster.
Posted by Mathias and Jen Dubilier at 09:17

I am right there with you, I so understand that feeling of living on the edge between land and water, the calming effect and at the same time the quickening at the awesome sound, feel of the air, the visual beauty....judith