This is big fat thank you to three sets of saviors.
When we jumped ship into our dinghy, I started paddling. There were three boats anchored in the bay with us. I made a split-second decision to paddle toward one of them. That decision was based on the fact that this boat was the only one which was reacting to our fire. They had their motor on and were hauling up anchor.
A wise decision when a nearby boat is on fire and could explode. (As the propane tanks did about a half hour later.)
The other two boats didn't seem to have a care in the world.
It turns out to have been a great boat, owned by a couple of German and Turkish origins with a young son.
Andreas, Canan and Timmy took us aboard and immediately began caring for us. They helped us contact authorities. We were offered wine. They spent hours that first night with us, motoring us to the harbor, making phone calls for us to find my brother. They gave us shoes and a cellphone for the next few days. And constant, warm support.
Unfortunately, we never got a photo of them. I snagged this one from their blog.

Sailors help sailors, but this family went above and beyond.
If you can read German, you can follow their blog as they journey aboard their boat Lime Light, starting in Turkey and heading toward the Canary Islands.
Thank you Canan, Timmy and Andreas!
The first evening, the Guardia Civil delivered us to a hotel and with Fortuna smiling on us, into the hands of the receptionist Jill Harrot-Garott.
Jill is a minor tornado of help. The next day, she drove us to the police, vouched at the National Guard for our integrity, took us to the harbor to recover our passports, took us shopping and bought us clothes and food and toiletries. And that was all just day one.
For the next five days, she was our guardian angel. She chauffeured us to various appointments, negotiated the language barrier with officials, made arrangements with a diver to recover our money, and didn't stop giving us moral support.
Here is this sweetheart of human being. 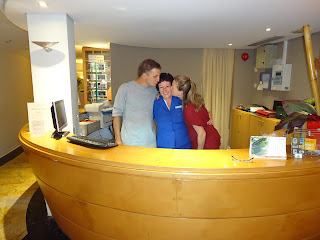 Thank you Jill!
Within 24 hours of our disaster, Roland arrived on the scene, armed with money, guns and lawyers. Well, money anyway.
He fixed us up with credit and helped us with the incredibly difficult emotional task (and just plain dirty task) of sifting through the weckage of Dolphins.
It is fundamentally reassuring to know that if you only can make one phone call in life, there is a person on the other end who will arrive, no questions asked, almost before you can hang up the phone.
Here is the man in action: 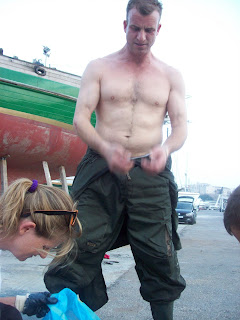 Thank you Roland!
And thank you to all of you who have called us and written us and told us to continue on with our journey.
It was really so helpful to find so many people rooting for us.
We have started our search for another boat. We will head to Turkey in the next few days because the boats are more plentiful and cheaper there. And they are where we want to spend the winter.
In the meantime, we spent this past week in Rome. It was a 16th birthday present to Zoe. We had a great time. I have written a report on Rome that is long. (Not written in one day.) But anything less just wasn't going to do this trip justice. I will post it later today or tomorrow.
Posted by Mathias and Jen Dubilier at 14:10

Email ThisBlogThis!Share to TwitterShare to FacebookShare to Pinterest
Labels: Sailing

in the pic w/ Jen and Roland, Dolphins in the backround...w/o knowing what a broader pic would reveal, you'd think it was in pristine condition


btw... when you're perusing the selection of boats, try to keep in mind I'll require a stateroom of reasonable size, either mid-ship or aft, that has good ventilation, and preferably with a solid door ... ideally she'll have a genset and air conditioning ;D