Up in smoke, all in a matter of minutes

Below is the report I had to submit for insurance purposes. It is rather dry, but it gives the blow by blow of what happened.

At 18:40, we departed fuel dock in Mahon harbor and headed for anchorage. We were anchored at 1900. We started preparing for dinner. Jennifer was preparing dinner in galley and I was sitting in cockpit. About 15 to 20 minutes had passed since we had dropped anchor. Jennifer called to me and said the boat’s lights all just out and came back on again. That’s odd, I said and asked whether the electrical panel lights went out too. Yes, she said. Then a moment later, it happened again. This time, I looked down into the boat and saw that white smoke was wisping up from under the companionway stairs.

I immediately ordered Jennifer into the cockpit and rushed down and pulled away the companionway stairs. I saw white smoke rising from behind the engine up to the ceiling of the compartment and pouring out through the companionway. There were no flames.

I grabbed a flashlight to see if I could identify the source of the smoke, but when I turned it on, it just brightened the white smoke and I couldn’t see anything. I reached to the gas solenoid switch and turned off the gas.

I grabbed my portable VHF radio and issued a Securitee warning that we had a possible fire onboard and to stand by for further communications.

I grabbed one of my two one-pound fire extinguishers and emptied it around the engine. That seemed to stem the smoke a bit. I went into the cockpit, opened a hatch to see below where my battery and 110/220 transformer is. The cockpit lazerette was completely clear of smoke and I didn’t smell anything unusual.

By now the smoke from the companionway had increased again. It was getting more in volume and was now getting darker, blacker. I felt I had to go in again and try to empty the other extinguisher. I was anxious about getting caught in the cabin, but I knew the butterfly hatch over the salon table was open as an escape.

At this time, I issued a May Day call on my VHF several times.

I went below and grabbed my second extinguisher and emptied that one into the engine compartment. There were still no flames at that time. Then I climbed back into the cockpit. I told Jennifer we were abandoning ship. We went forward and untied the lashed RIB dinghy. We attached a painter to it and threw it overboard. We grabbed the two oars and then climbed in over the whiskerstays at the bow. We had nothing with us except the clothes we wore. No shoes, no glasses, no wallets, no phones. Nothing.

I paddled to a nearby sailboat, crewed by a German couple. As we were climbing aboard, an official on the VHF asked for the exact position of the boat on fire and if there were any endangered people. I gave the coordinates and said that we were both safe on another boat.

As we watched, the smoke became thicker and blacker. Within about five minutes of being aboard, we could see flames leaping out of the companionway. We watched in shock as the flames became brighter and bigger. We couldn’t believe this was happening.

On the nearby north shore, we saw a vehicle with a blue light flashing. But we were surprised that no fire boats were arriving. We watched for what must have been for about 45 minutes as the flames spread and engulfed the whole boat. And no one arrived.

We felt there was nothing left to do and we needed to begin the process of getting to authorities and reporting the incident and finding a place for  the night. So the couple motored us to the harbor, past the fire boats which still were not launched. By this time, more than hour had passed.

During the whole ride in, I kept calling on VHF 16 for Guardia Civil, police and finally for anyone to respond, but no one responded. The couple finally called emergency on their cellphone, and the dispatcher suggested calling Guardia Civil, which we did and two officers came to the dock. They didn’t take a report but just drove us to a hotel.

The German couple loaned us a cellphone and 40 Euros, and shoes. I called my brother in Germany and he arranged for payment with the hotel by phone.

The next day, the hotel clerk was a saint and drove us all over town and translated for us. We drove to the airport to give our report to the island’s Guardia Civil chief. He interviewed us for over an hour and the hotel clerk translated.

The resulting report is referenced above.

Then we received word of a minor miracle. The fire department was doing a sweep of the bay and found a floating Pelikan suitcase containing our passports and boat documents. Our hotel clerk drove us to get the case and documents.

Personal addition which was not included in the report:

Roland and his girlfriend Dagmar arrived within 24 hours of the fire. Today, all of us, including the hotel clerk, got into a dinghy and followed a diver out to the site. I asked him to find our money box and our jewelry.
He took a long time and came up with a melted tool box and said it was difficult to maneuver in the boat because the deck had collapsed into the boat and everything was burned. But he was determined and went down again.

Finally, he came up with our money box. He couldn't find any jewelry.

Tomorrow, Sept. 29, a team will re-float Dolphins and bring her to a workdock.

The technical side of me will be fascinated to see this. But I know Jennifer's and my hearts will sink as the burnt hull surfaces. I'm sure there will be more tears. That will be very hard to see.

I have little hopes that anything can be salvaged. 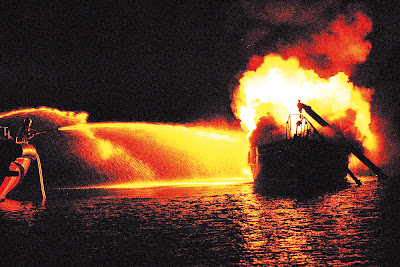 Posted by Mathias and Jen Dubilier at 23:33

Email ThisBlogThis!Share to TwitterShare to FacebookShare to Pinterest
Labels: Of Boats, Sailing, The Fire

What a terrible turn of events! I wish there was something I could do to turn back the clock. I am greatly relieved to learn that you both escaped the flames. Poor Dolphins. I hope her story isn't over.

I couldn't believe it when Rachel told me. You have the most important things still left though.