We arrived in Formentera the day before yesterday, following a three-day passage. It was Jen's and my first passage alone together and we are glad to report, it went well. Weather was great. We caught and ate a small dorado on our third day.
Yesterday, for the first time during this trip, we rented a motor-scooter. What a blast! We kept laughing because we couldn't stop thinking about Eddie Izzard's schtick about scooters.
Here's a clip:
Eddie Izzard on scooters
But find and watch the whole monologue someday. That guy is a riot.
Here's Jennifer doing the ciao: 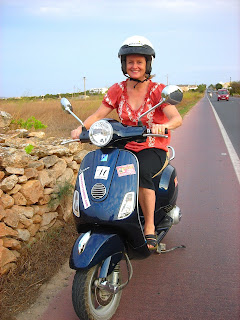 In reality, I did all the driving, while Jennifer did all the hugging. These little scooters are fun, but dangerous as hell. Such small wheels! It's like trying to hold onto a child's scooter with loose handlebars that's fitted with a nitro-rocket booster.
Anyway, so there we were, zipping around, going "Ciao!" and we ended up on the other end of the island at this craft market, which is officially known as "The Hippie Market." 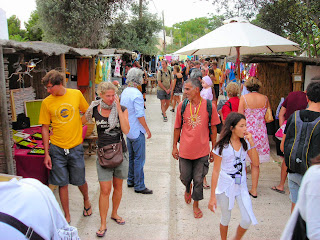 Actually, some pretty decent crafts are offered here. Mostly jewelry, leather goods and clothes. And yes, some presents were bought here.
The hippie market runs from 4 to 8 p.m. We left around six, just when the musicians were starting. 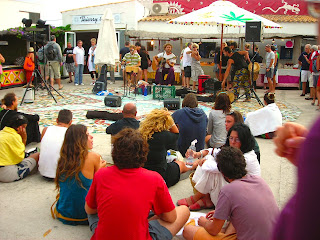 As we "ciao-ed" around the island, we drove by lots of dry, red-earthed fields that were separated by stone walls. It was hard to tell what is grown here, because most fields looked as if they are regularly tended, but they were bare. 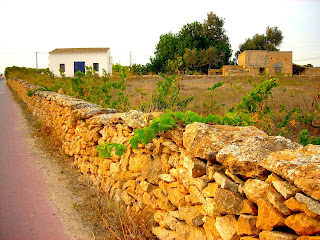 Apparently, at one point, this island produced a lot of grain because the latin origin of the name Formentera is frumentarium, or granary.
Around the harbors, coves and lagoons, there are boat ramps. Some are covered and appear to serve working fishermen. 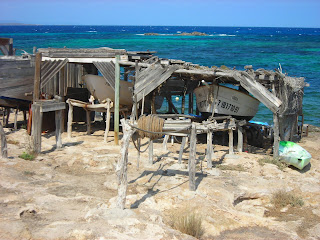 Others are almost hard to believe they are for real: 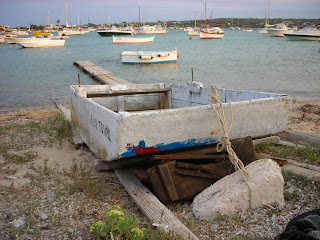 On the second day of our "ciao-ciao" rental, we zipped out to a far-flung cove with a beach-side restaurant and had delicious paella, 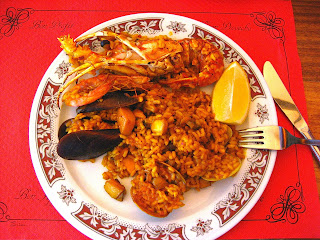 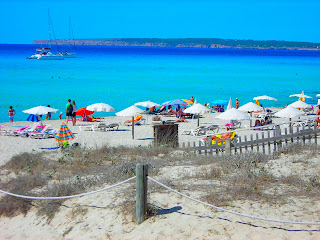 and yes, if you click on the photo and zoom in enough, you will see that Formentera's beaches are quite relaxed when it comes to requiring proper attire. Or any at all. Though, it seems that most people believe in the principle of preserving some mystery.
And finally, this is my favorite scene. It is from a shallow bay just next to our harbor. It is full of run-abouts and local dories. 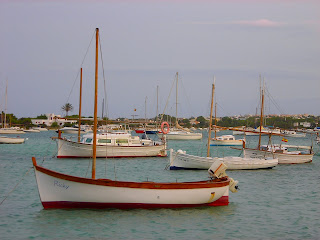 "Ricky" here reminds me of a dory being built by my friend Gordon in his barn in Huntington, Vermont.
I like this island. To me, it seems like the European equivalent of Cape Cod.
Posted by Mathias and Jen Dubilier at 19:59

Email ThisBlogThis!Share to TwitterShare to FacebookShare to Pinterest
Labels: Places and People

Chyowww! Yes, but have you got a phlagg? Love the hippie market. If you buy a hippie, though, what is it good for?