Autopsy of a Dream

The night of the fire, Jennifer and I both couldn't sleep while we laid in this hotel room. I kept going over in mind, if there might have been something else I could have done. But after talking to several people here and the insurance investigator, I just have to accept that it was an accident and there was nothing anyone could have done.

The assumption is that it was old wiring failed and sparked and burned.

On the one hand it is a relief to know it was nothing that could have been prevented. On the other hand, it is disconcerting to think that going forward, if there is a "going forward" in some next boat, there might be some ticking time bomb that I just can't prevent from happening.

Today was the salvage day. They floated the boat and brought it into harbor. It was hard to see it. Entirely burned to the waterline. will post pix to the blog. My brother Roland and I rummaged through it. It was messy work. Miraculously, we found some jewelry. The bracelet Jennifer gave to me. With a charm on it that Zoe had given me. And among Jen's jewellery, the necklace she wore at our wedding.

I so much wanted to save something from Dolphins, but in the end, I felt like I just had to acccept that she was destroyed. The few bronze items that survived, and I set aside to save, I left behind. It would have been too difficult, both logistically and emotionally to figure out how to get it out of this phase of our lives and into the next.

At times, during these last few days, I remind myself, that a boat burning and sinking is the most honorable way for a boat to die.

It helps. A little bit.
Here are some pictures of what we saw. 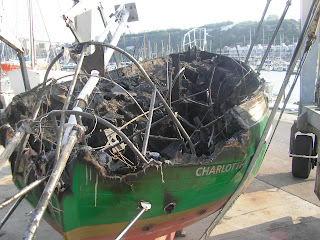 Here is a shot of the claims agent doing his investigation: 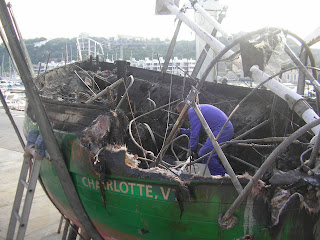 In the photo below, the metal piece with the two round holes was our stove. The square things to the right were our sinks. To the right, you can see the opening to the icebox. This was the only area on the boat that was so well insulated, that event the plastic water bottle was preserved perfectly and a bag of carrots was found, among other things. In the lower left foreground, you can see the engine. The green fluid is the coolant that leaked out when the engine melted.
The black or grey "blanket" that is laying on the top of the photo is the melted fiberglass deck. 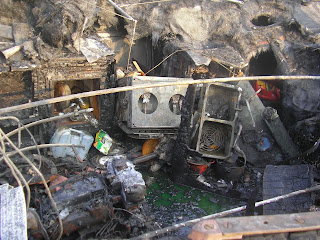 Roland and I sortrd through the muck and debris. We had to cut away fiberglass, smash burnt wood and dig by hand, like archeologists, handful by handful through charred remains in search of anything that might be worth saving. 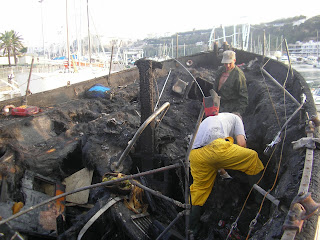 Posted by Mathias and Jen Dubilier at 01:50

Email ThisBlogThis!Share to TwitterShare to FacebookShare to Pinterest
Labels: Of Boats, Sailing, The Fire

We are in complete shock over this sad, sad news. Your writing and photos make it all incredibly vivid. You are so much in our thoughts. Love, Lee, Jan and Jordan

continue the trip on a "ciao" scooter ?

driving/hugging and ciaoing along the coast.....all the way to Turkey (where it seems there's lots of boats for sale)

why would Turkey be full of used boats?