The last few days have seemed like weeks, in a good way.  I felt like I had been preparing for leaving for so long that actually getting here was becoming more of an idea that I talked about and explained than an eventuality.  Then there were all the goodbyes:  in Vermont, Rhode Island (NYC - Jeff) and then Boston, another sign that I was really doing this crazy thing, leaving my life and friends for two years!  It still didn't seem real until the last day when I had to say goodbye to my very closest people, that was hard, really hard.

I took my very first, First Class plane flight, it was excellent.  I can see how people get addicted to the ease of this type of traveling.  No lines, free drinks, comfortable seats and smiles lots of smiles, your smiling, the airline attendants are smiling and all your fellow first-classers are smiling, why would they be, its all so easy.   But despite all the ease and comfort I still didn't sleep and I arrived excited and exhausted just as I do with all my cattle-class flights.

I was a bit disappointed that I wasn't able to arrive before Mathias and greet him at the dock after his three week long, heroic voyage, but I never expected that he would come to greet me at the airport. 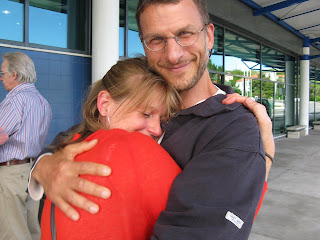 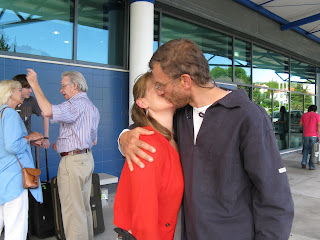 Our little apartment is just perfect, its a remodeled 19th century fishing cottage, like many of the houses in the town. 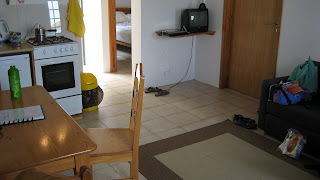 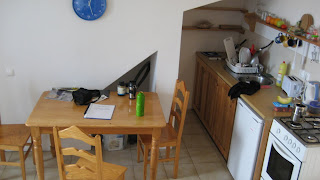 The view from the garden at the top of the apartment 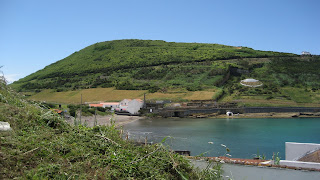 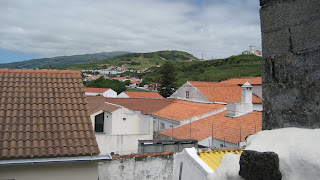 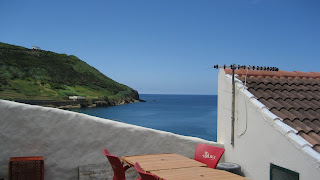 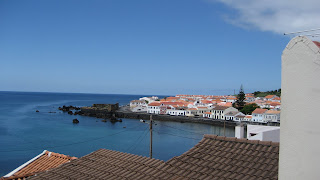 Horta is a major stop for sailors crossing the Atlantic,  and almost all the boats in the large marina are sailboats, and the tourists and transient sailors who are stopping to revive and reload and this gives the town a relaxed and almost gracious vibe. 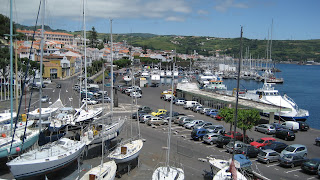 View of the marina from the top of our street. 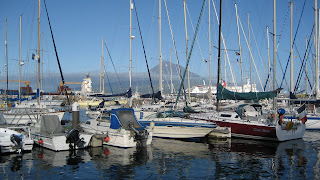 Boats at dusk, with the volcano on Pico, the next closest Island visible in the background
Posted by Mathias and Jen Dubilier at 14:38

Email ThisBlogThis!Share to TwitterShare to FacebookShare to Pinterest
Labels: Journal

YAY! You both look vibrant and happy. Glad to hear everyone's safe across the lake - and we're looking forward to hearing LOTS more about your adventures. And planning our Mediterranean visit!

....some pics from the crossing maybe ?

.... perhaps a pic of your dinner plate when it arrives at the table accompanied by a descriptive line or two of the evening fare ......

some harrowing sea tales of the crossing, give us somethin'


awaiting what's sure to be the forthcoming spectacular images and compelling content....

so good to see you reunited!!!! wish we could be there eating dinner with you two.
Tammy & Ronen

Congratulations on not crashing into the moon, among other things out there on the open water, but especially congratulations to Jen for getting such nice digs for your Azores stay. You both look lovely and happy.

Skype will be on again, so try us sometime,