Its been a week or two since out last post.  Mathias is five days out to sea.  I am staying with Rachel in her new house in Union Sq. Somerville, MA.  We made it down the rest of the locks. 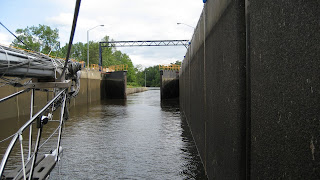 This is lock 12 I think.
The journey was not without its setbacks.  We had a few days of engine trouble and needed to visit a few auto parts stores in Albany, NY where Mathias installed an electric fuel pump, while I paid all the bill we had been ignoring during the busy weeks leading up to departure.  After the engine troubles we headed out of Albany on a beautiful day and I took the helm while Mathias packed away the pins and bins and screws and tools that has been up to our necks.   All was looking up until I grounded poor Dolphins on a sandbar near Hudson, NY.  To be fair to myself it was a bit confusing with the channel being hidden by high water and me not knowing what to do about the lighthouse in the middle of the river,  going right seemed right, but it was not.  I felt absolutely awful and stupid, but Mathias was a prince, he kept telling me that I was now a real sailor because there are only three kinds of sailors: those who have grounded, those who will ground and those who lie about grounding.   We decided to make some lunch and see if the tide would get us off.  It did, two hours later we were on our way.
Duke and Andy helped us step the mast at the Haverstraw Marina.  It took all day, it was hot, it was clear we were not going to make NYC by evening -- I was very cranky... 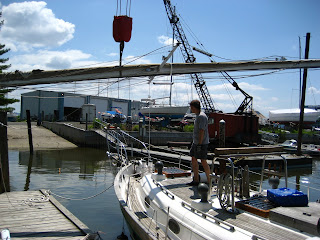 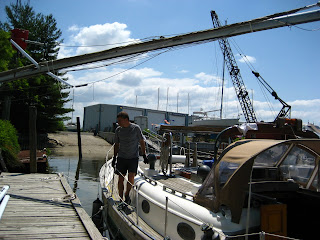 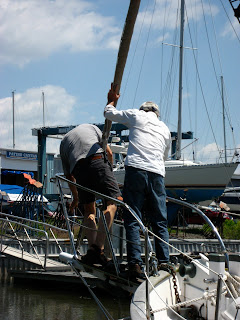 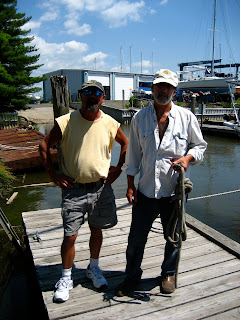 Duke & Andy
We finally made it to Pt. Judith R.I. and met up with our fabulous crew.